Gracehill ; World Heritage Site Partnership – What does it mean?

A World Heritage Site is a landmark or area which is designated by the United Nations Educational, Scientific and Cultural Organization (UNESCO) as having "cultural or natural heritage considered to be of outstanding value to humanity.".

The Giant’s Causeway is currently the only World Heritage Site in Northern Ireland, designated as a natural heritage site of global geological importance.

The Convention under which World Heritage Sites are designated is one of the most widely recognised international agreements in the world and also the most popular cultural programme in history.

The Moravian Church dates from 1457. In 1722 the Moravians renewed the Church and  established a Settlement at Herrnhut in Germany from where they travelled around the world often founding new Settlements wherever they went.

The village of Gracehill, was founded as a Moravian Settlement  in 1759. It has a rich history and has won many awards including the Europa Nostra Award. It is Northern Ireland’s first designated Conservation Area (1975) and the only complete Moravian Settlement in Ireland. Life in the village nowadays is, of course, very different to the 18th century, but the layout of the buildings and the unique Georgian style of architecture remain very much the same. The village plan is a simple grid pattern with designated green spaces. It is an early example of town planning reflecting the timeless values of education, equality, industry, tolerance, and spirituality that the Moravians shared wherever they established Settlements.

The Moravian Church remains central to the village, facing the Square and flanked by the Manse and the Warden’s House. The Brothers and Sisters Walks on either side meet behind the church at the burial ground or “God’s Acre”. In the 18th century the village was highly structured. The Moravian values called for a community-based way of life; 250 years ago there was a village doctor, access to education and many houses had fresh running water.

The Gracehill community has worked with other similar Moravian Settlements around the world to develop a joint bid for a World Heritage Site submission to UNESCO. Gracehill is one of a number of similar historic Moravian Settlements scattered around the Globe and since 2003 we have been actively involved with an international network known as the Christiansfeld Initiative. Christiansfeld is a Moravian Settlement in Denmark and it was here that in 2003 the first international network conference took place. The second conference took place in Bethlehem, Pennsylvania in 2004 and subsequent conferences were arranged in Cape Agulhas, South Africa in 2006 and here in Gracehill, in 2007. (This was generously supported by the then Ballymena Borough Council).

Gracehill Old School Trust (GhOST) submitted an application, on behalf of the village, to be considered as a potential world heritage site to the Department of Culture Media and Sport(DCMS) in London and in March 2011 following assessment the UK expert panel commented as follows:

“Gracehill provides excellent evidence of a socio-religious system – the Moravians – which, unusually for its time was highly tolerant. The international importance of the Moravians is high and there is potential for a transnational nomination of Moravian sites. This site was judged not to have the potential to demonstrate Outstanding Universal Value (OUV) on its own. The Government should consider adding Gracehill to this Tentative List in the future if firm proposals for a transnational nomination should be developed, provided that it can be demonstrated that the site could make a substantial contribution to the OUV of the series as a whole.”

Subsequently, building on the successful inscription of the Moravian Settlement of Christiansfeld in Denmark as a World Heritage Site (2015), a transnational nomination entitled “Moravian Church Settlements” is being prepared to include Bethlehem, Pennsylvania (USA), Herrnhut(Germany) and Gracehill. This is  being led by the United States Government. Early in 2022, Gracehill was accepted onto the United Kingdom’s list of potential World Heritage Sites and, as a result, Bethlehem, Herrnhut and Gracehill, supported by the already designated Settlement of Christiansfeld, will go forward to UNESCO as a single international bid, entitled “Moravian Church Settlements”

To achieve World Heritage Status it is necessary to demonstrate “Outstanding Universal Value” (OUV). This means cultural and/or natural significance which is so exceptional as to transcend national boundaries and to be of common importance for present and future generations of all humanity. UNESCO list 10 possible criteria and the Moravian Church Settlements nomination will be applying under criteria 3 and 4:

(iii) to bear a unique or at least exceptional testimony to a cultural tradition or to a civilization which is living or which has disappeared.

(iv) to be an outstanding example of a type of building, architectural or technological ensemble or landscape which illustrates (a) significant stage(s) in human history;

Once OUV has been established for a potential site it is necessary to define the limits of the site. The designated site will have a “Boundary” detailing the actual area and a wider surrounding area or “Buffer Zone” which, UNESCO guidelines state, includes the “immediate setting of the nominated property, important views and other areas or attributes that are functionally important as a support to the property and its protection.”

There will be associated planning policy to ensure development does not affect the OUV of the site but this will be the subject of a public consultation process and it is envisaged this will be similar to the policy that currently applies to the Conservation Area.

The Moravian Church Settlements- Gracehill WHS boundary (See Map) lies entirely within the existing designated Gracehill  Conservation Area . The Buffer zone (See Map) was identified following a review of the setting of the village, which in addition to key views, included a study on its historic relationship with the wider townland of Ballykennedy, which can still be read in the settlement patterns, routeways and field boundaries. This followed extensive research involving the Historic Environment Division of the Department of Communities, Mid and East Antrim Borough Council Planning Department, World Heritage experts and Gracehill representatives. 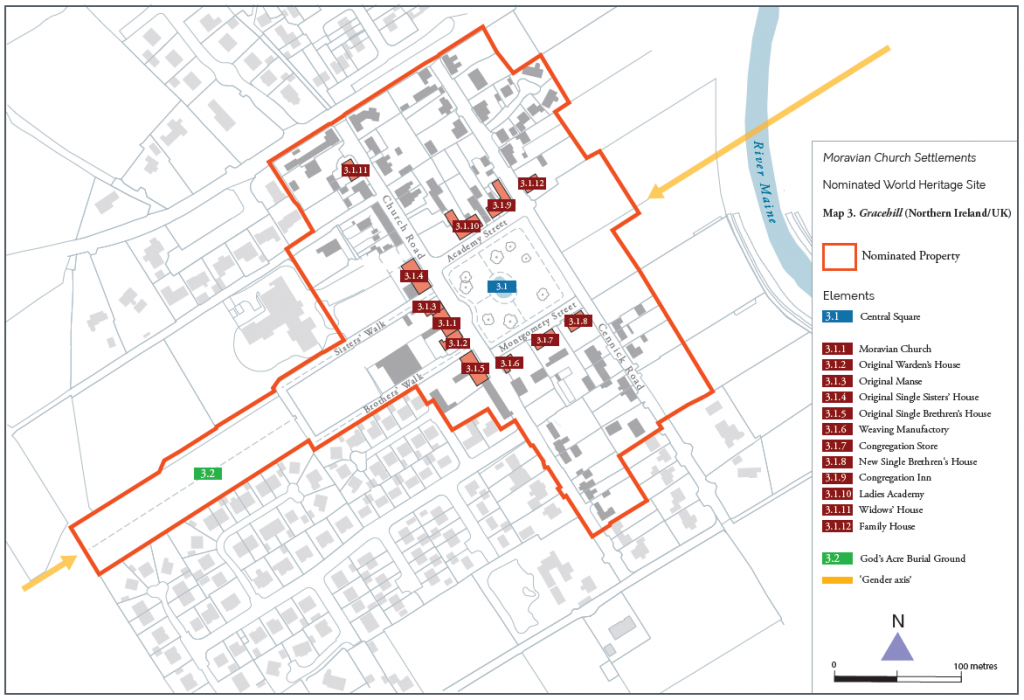 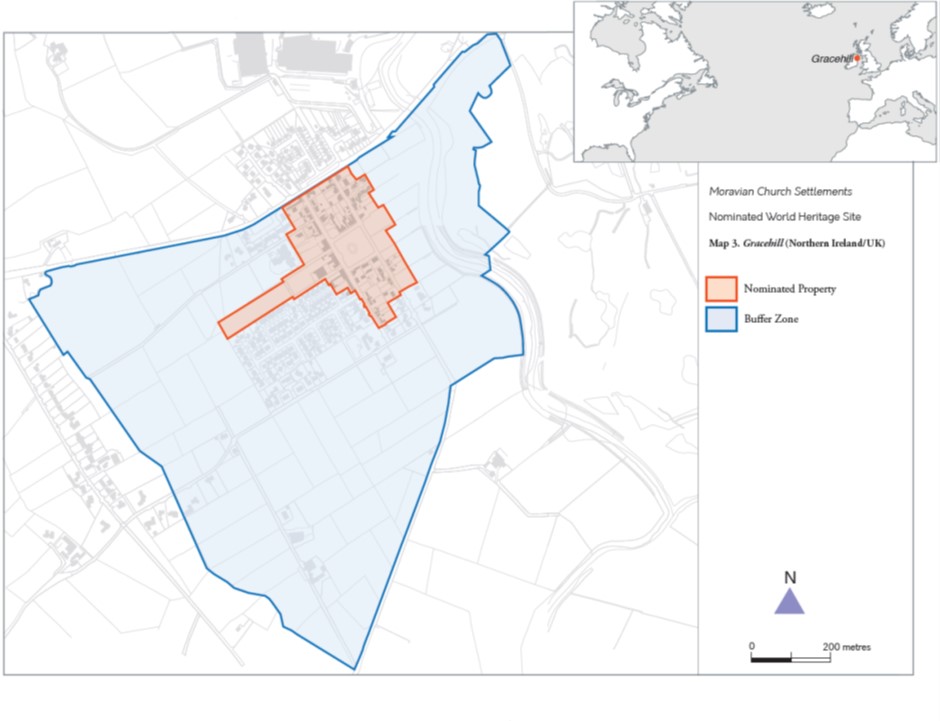 Gracehill is of historic importance and contemporary relevance because of its values, authenticity and integrity.

As an eighteenth century Irish Settlement it remains intact with a well-preserved collection of buildings and an active Moravian Community. There are unique historical, cultural, social, educational and religious features.

The prize of World Heritage Site status would be hugely significant granting Northern Ireland its first cultural World Heritage Designation, thereby supporting tourism and the economy whilst enriching the profile for the whole region. This is a unique opportunity to achieve something of lasting significance that everyone can be proud of and share in, with  substantial potential benefit now and for generations to come.

As part of the bid to UNESCO, it is important to demonstrate community understanding and support for the application.  We are keen to hear your views and we welcome all comments.

Attend one of our Public meetings.

2003 Gracehill joins the "Christiansfeld Initiative" This involved working with international partners in Europe, USA and South Africa. Christiansfeld is a Settlement in Denmark.

2011 Gracehill Old School Trust (GhOST) submit an application on behalf of the village to the Department of Culture Media and Sport (DCMS) in London and following assessment the UK expert panel comment that Gracehill has potential and suggest the UK Government should consider adding Gracehill to the Tentative List if certain conditions can be met.

2015 Christiansfeld inscribed on the UNESCO World Heritage list in 2015 following significant research over previous years and an independent international comparative study. This study also involved Gracehill and ranked Gracehill as one of the Settlements which best fulfilled the requirements for world heritage status.

2017 Government of Saxony, Germany on behalf of Herrnhut  commission a publication of European Settlements and send representatives to Gracehill.

2018 International conference Herrnhut, Germany. (Speakers from Gracehill invited to address conference. Herrnhut exploring opportunities for a joint bid with Bethlehem,USA to extend Christiansfeld inscription. It was suggested that the addition of another Settlement would strengthen the bid and the Gracehill was suggested as a potential partner.

2019 Book launch, Gracehill. In the presence of the Mayor of Mid and East Antrim Borough council and a number of elected representatives. The guest speaker was Rev. Dr. Jørgen Bøytler from Denmark who gave the keynote address entitled “Partnerships on the Journey to World heritage” Dr. Bøytler is General Secretary of the world wide Unity Board of the Moravian Church and also spearheaded the successful Christiansfeld bid for World Heritage status. Guests also included Ms Friederike Hansell the Coordinator for World Heritage, Ministry of the Interior, Saxony State Government and Mr Barry Gamble, an Independent World Heritage Consultant (UK) who has been commissioned by the Saxony State Government and  now Bethlehem to act as Coordinator for the "extension" of  Christiansfeld World heritage listing.

2021 Gracehill formally invited to join the UNESCO World Heritage bid in partnership with Herrnhut, Germany and led by Bethlehem, USA.

Your ticket for the: World Heritage