Moravians developed a distinctive way to plan and build their settlements. They have established congregations and built such settlements across the Globe, always creatively adapting the planning and architectural ideas to local conditions while retaining the core principles.

The Moravian Settlement at Gracehill, like many other Moravian settlements around the world, is an early example of “town planning” and dates from 1759 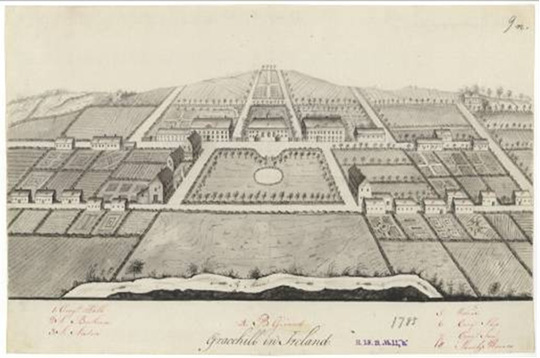 It is the only complete Moravian Settlement in Ireland and the unique atmosphere and special qualities of Gracehill were recognised in 1975 when it was the first place in Northern Ireland to be designated a Conservation Area.

The conservation area contains sixteen listed buildings and planned green spaces and its form remains much as it did in the late eighteenth  century. Gracehill is not just a historic site but it is significant because of its religious, cultural, social, educational, architectural and international associations.

It has also contributed to reconciliation during turbulent times in Ireland.

Much current thinking around Town Planning is concerned with “Place making” where the aim is to create places that people will enjoy and which will ultimately create the scenery and backdrop against which they will live their lives, places that are positive and uplifting and perhaps even inspiring, places with a narrative or stories that attract and sustain people. Clearly the early Moravians were experts at place making.  They knew how to make people feel positive, they had a narrative and in establishing their settlements around the Globe they had a vision.

Against this background, such a significant and historic area as Gracehill requires care and attention to not only maintain it but also to enhance it while ensuring it meets the requirements of a modern community. In the early 1990’s Gracehill Environmental Improvement Association was established with representation from the Moravian Congregation, the local residents and Ballymena Borough Council. The Association was involved in a variety of activities including the production of the first “Gracehill Area Development Plan” in 1996 followed by a study the following year to look at possible improvements and enhancements.

In 2002 Gracehill Old School Trust (or GhOST as it became known ) was established, incorporating the Environmental Improvement  Association. Since this time there have been a number of further studies and plans but happily many of the enhancements suggested in the initial report have been realised. These include restoration and reuse of the Old School, restoration of the Square, the provision of some literature and signage, the installation of the Victorian postbox and the ongoing work on the Old Shop building.  To further support the community the Moravian Congregation has renovated the Church and constructed a much needed new hall known as “Cennick Hall”.

In addition to all this a number of other schemes were proposed including the provision of walks or paths around the Village.  These included:

The initial aim of the God’s Acre plan was to provide easy access to this historic, unique and beautiful area but in 2011 prior to a visit by TRH The Prince of Wales and The Duchess of Cornwall an adjacent area for potential woodland planting had been identified and this was to be known as Jubilee Wood in honour of HM The Queens Diamond Jubilee in 2012. This added to the neighbouring woodland already planted by Gracehill Primary School.

In 2014 GhOST and Gracehill Moravian Church worked to develop a scheme to explore the route any such path might take. Funding to commission studies was obtained from “The Challenge Fund” which distributes money raised from the plastic bag tax for environmental projects in Northern Ireland.

A feasibility study and plans were developed with the assistance of a tree specialist, Dr Philip Blackstock and landscape architects.  It was particularly pleasing that the landscape architect involved was Mr Norman (Barney) Graham of MWA Partnership as he had been involved in the first study in 1996!

Given that this was potentially a very significant intervention in the original planned Settlement great care was taken to ensure proposals would not detract from the historic environment and unique atmosphere. Happily plans were eventually produced which brought together long overgrown paths, bits of unused land and previously inaccessible but beautiful areas. 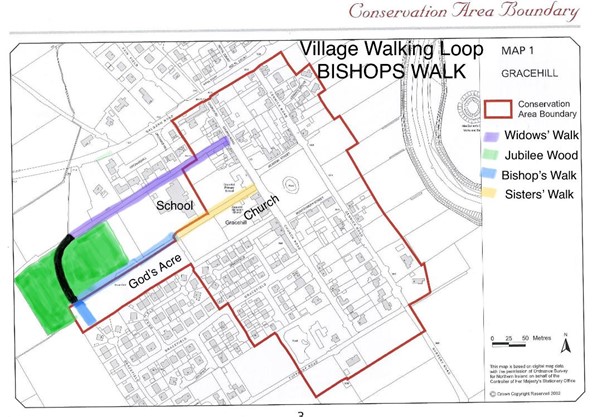 These plans highlighted the opportunities and potential for improving access to the natural and historic environment with resultant benefits for health & wellbeing, tourism and the economy. They also proposed enhancements to the setting of the village promoting the development of safe and easier access to a historic and beautiful natural area thereby encouraging people to walk and enjoy the special space. By linking potential woodland areas the development of the Jubilee wood would be enabled which would also give local school children the opportunity to appreciate trees and the woodland generally as a living area with both old and new trees.

Gracehill Moravian Church Council gave permission for construction of the section of path as detailed at the bottom of God’s Acre (a permissive path agreement) and for associated access and work on trees overhanging any sections of the path.

By now Ballymena Borough Council had become the Mid and East Antrim Borough Council (MEABC) and a new “Gracehill Village plan 2017-2022” was produced.  MEABC were developing a programme of Village Renewal Schemes and as part of the new village plan an ultimately successful application for funding for “The Gracehill Walking loop” was submitted.

With all planning and legal permissions in place and funding secured, work began in early 2020 to develop the path. Work was interrupted by the Corona Virus Pandemic but subsequently the pathway was completed by September 2020 at a cost of approximately £120,000.

Mindful of the importance of “Place” and “narrative” it was suggested to MEABC that rather than call the new amenity “Gracehill Walking loop” the names of the existing paths should be highlighted with appropriate signage.  MEABC were supportive of this suggestion and also warmly welcomed and accepted the proposal that the new section of pathway be named Bishop’s Walk in celebration of the consecration of the Rt Rev Sarah Groves in November 2018. Everyone in Gracehill was delighted!

As we celebrate this wonderful new addition to the village we thank all those who supported and helped over so many years not least MEABC for their generous funding.  Everyone can now benefit from an important amenity that not only promotes wellbeing and regeneration but also enhances the historic environment and helps celebrate another chapter in the ongoing story of the special place that is the Moravian Settlement of Gracehill.

Your ticket for the: The Bishop’s Walk